The Beginnings of Methodism in Whitchurch

The earliest Wesleyan Methodist congregation began to meet around the middle of the 18th Century. Initially, small groups probably met privately in their homes, but by 1750 they met more openly in their first chapel, formerly an infant school. This was a building at the rear of two small cottages, 26 and 28 Claypit Street, unfortunately now demolished. The property was owned by a Mr Parsons, a gentleman farmer of Wirswall, who seems to have been the ﬁrst man of influence to take a stand for Methodism in Whitchurch. John Wesley preached in Whitchurch on 18th April 1781.

By 1810 the increase in the numbers of Wesleyans necessitated the building of a new chapel, which was opened on July 10th 1810 in St Mary’s Street. The manse opposite the chapel is now a block of offices, although a stone plaque can be seen on the side wall of the building, from the office’s private car park on St. John’s Street.

When this chapel was replaced by St John’s, it became an auctioneer’s ofﬁces, then the Post Ofﬁce and is now the Heritage Centre. By 1877 Nonconformity was undergoing one of its periodic upsurges and the time was opportune for the building of a new and larger chapel, so plans were made to build St John’s, the third Wesleyan chapel in Whitchurch.

The Building of St John’s

Land was bought from Earl Brownlow, adjoining what was known as Bear Garden Lane and immediately fronting the new Smithﬁeld Market Place.

The architect for the new church was Mr. John Rogers of Prees. The building Contractor is named in church records as John Stringer of Sandbach. The external masonry is Grinshill sandstone, which is quarried only 12 miles to the south of Whitchurch, and the internal masonry was completed in Runcorn stone. The building of the Church took place from 1877 – 1879. The date of consecration was 24 April 1879 and the first preacher named as Revd Dr Pope.

The foundation stone was laid at a special ceremony on October 25th 1877 by a leading Wesleyan of the time, Sir Francis Lycett (1803-80), who donated £100 towards the building of the church.

This was considered a great coup, because Sir Francis had turned down requests to attend similar ceremonies for other churches. The reason he came to St John’s was due in no small way to a lady called Mrs Sarah Smith (maiden name Savage – see the information on St. John’s stained glass windows elsewhere on this website), who was the wife of iron founder Robert Thursfield Smith. She became acquainted with Sir Francis Lycett whilst attending Methodist meetings in London, and his nephew, Mr Nash, was connected with Mr Smith’s foundry business.

Mr. Nash lived for several years in the Smiths’ house. During this period and particularly during a long illness, Mrs Smith gave him much motherly kindness. Sir Francis was impressed by this, and some time later in memory of his nephew and out of respect for Mrs Smith, he broke his own rule and came all the way up from London to lay the foundation stone for our church.

Many local people helped to raise money for the church. For example, Mrs Smith organised a bazaar which lasted 4 days and raised just over £1000 and Mr Joseph Beckett (see information on St. John’s stained glass windows elsewhere on this website) donated £500. The opening service for the church was held on April 24th 1879. 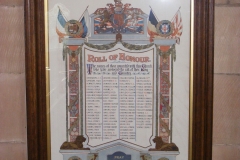 Online newsletters have address, telephone and email information removed to preserve the online privacy of individuals.